Want to climb to the top during the day, while surviving the night? Deciding whether to keep your car stock or go completely berserk? Drift or race? Ghost’s latest addition to the franchise has you covered.

Of course, we should probably address the burning question that everyone’s wondering – Is it worth buying? And my answer is a massive YES! I’ll briefly summarise why now and then go into more depth. As you may know that in 2012, Ghost Games took over the Need For Speed franchise, however their three Need For Speed games – Rivals, 2015, and Payback, were definitely not the greatest. They have loads of people frustrated at them for various reasons like brake-to-drift, weak gameplay, bad cop AI, boring maps, etc.

So why buy Heat? Well Ghost are really putting in a lot of effort this time, potentially because they know this is their last straw with everyone’s patience, and they’ve been quite active on Reddit giving us bits of information, and claiming things such as they’ve had a big think about “What Need for Speed means to you” and also talking about breaking traditions. From what we have seen from the three trailers that they released as well as gameplay from GameCom 2019, we can see major improvements.

A lot of people need to remember that Need For Speed is an arcade game, it’s just set in a realistic setting. I can say that the physics are slightly similar to other Ghost NFS titles, in the fact that all the cars do feel a tad heavy, or at least that’s what it looked like from the gameplay that we’ve been shown, potentially to do with the fact that unlike other cars, there is a lot of collisions at night, with cops constantly trying to basically kill you, but I’m not sure. On the other hand, there was a problem with older games where there was immense understeer, however, that problem seems to have mostly gone and been fixed.

Now to tackle the big topic. Brake 2 Drift, was a thing that has been in every single Ghost made Need For Speed, and every time, it was awful to drift. Your car felt like it was on rails when going around a corner. Even worse, NFS Payback gave you a speed boost while drifting. Combine that with the understeer when trying to grip, and drifting is faster than grip, which is really annoying, especially as it made drifting really easy. Simply tap your brake, and voila! Look at that skilled person drift…

Thankfully the grip/drift model has had a big look at. Drifting does actually feel like drifting now, you do have to throttle control to control the drift, otherwise… you’ll spin out! Finally, you can spin out, which is perfect. So how do you initiate the drift? There are 3 main ways, firstly, is to use the handbrake. Obviously you don’t hold this down, like a silly baboon, you’ve got to be sensible with it, and it’s useful for tighter corners or for extending drifts. 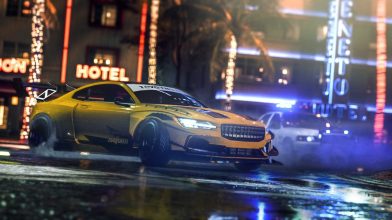 The second way is weight transfer, push enough weight on one side and the car eventually won’t be able to handle it, that is depending on a certain thing too, which I’ll get to after. The third, and new way to initiate a drift is via ‘clutch kicking’. In real life, people do use this to start drifts, where you would hold the clutch in, stab the throttle, and then release the clutch, very quickly, which would result in the rear wheels losing grip and spin. In-game, they’ve implemented this via double-tapping the throttle, which in a way does kind of make sense, but it will be very interesting to try out.

I briefly touched on grip versus drift, and they are really essential because, in Heat, the way you set your car up is interesting. If you look at the box on the image you have 4 characteristics on each side of the box, and a dot to represent where your car currently sits. 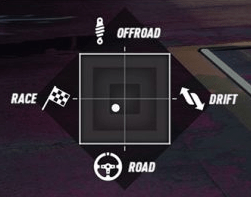 In full race, your car will be really grippy and it is virtually impossible to get your car to drift, in fact, if you even try, it will make you lose about 80% of your speed almost instantly, and it still won’t let you slide properly. Because the drift speed boost nonsense has been ended, properly taking racing lines through corners is the fastest way to go around a corner, as it should be! In drift, your car isn’t undrivable. You can still drive it normally, however, it will be very tail-happy, and you’ll have to be careful not to spin out. Just like normal drifting, you can control drifting via counter-steering and steering with the throttle. Drifting a drift car doesn’t particularly make it easier to drift, but it’s easier to initiate the drift, and might be easier to control in a drift, I’m not certain about that, so I’ll have to wait until it comes out. 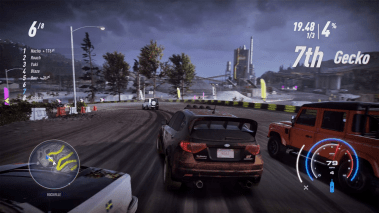 On the road, your car will obviously be faster on the road than other cars, but you’ll see a considerable difference in speed when you go offroad, and via Versa for Off-road setups. In my opinion offroad doesn’t really belong in a Need For Speed game, probably because of how badly it was introduced in Payback, but I’ll hold my tongue about it as they did add some interesting cars, such as the Hawkeye Subaru Impreza WRX STI, and the Mitsubishi Lancer Evo X (although I don’t really like the look of the Evo X) and some SUVs, if that floats your boat, I guess?

Well, neither do I. I don’t particularly want to spoil it for those that don’t want to know about the new characters, but beware that this part does slightly contain spoilers, so if you really don’t want to know, and just go off what you know from the trailers, then you should probably skip this section.

The characters are definitely a big step up from Payback, where the characters were fairly generic and the voice actors didn’t quite deliver their lines that well. In Heat, they aren’t real characters that have been green-screened, like what they did back in 2005, however, the character models do look decent for a racing game that is. 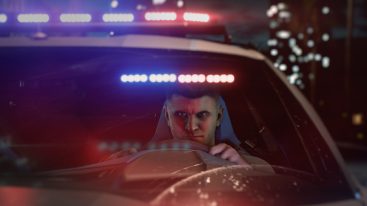 We have three police characters, and surprisingly as people thought, Lt. Mercer, the head of the High-Speed Task Force, isn’t the main antagonist, or at least as we’ve seen so far.

Shaw is the main antagonist, he drives that menacing Camaro that you’ve seen in the trailers. Talking about corrupt cops? Shaw will not disappoint. Lt. Frank Mercer has just been appointed the head of the newly formed High-Speed Task Force, and he will stop at nothing to get what he wants. Sure, Cross was mean, and such an amazing character, but he had a heart, unlike Mercer. Finally, Torres has a BMW S 1000 RR (or at least I think it is!), which might be really interesting to see, especially because of the fact that it’s… a bike, in Need For Speed. I have a prediction that Shaw and his Camaro will come out and play at heat level 5, just like in Most Wanted but not sure about the bike.

Then we have our two ‘good’ characters that’ll help us throughout the story. The main one is Ana. No, not the annoying voice from Forza Horizon 4. This one won’t be telling you when the next forzathon starts. She is potentially the main character that we’ll be seeing (besides the player, of course), and she drives a very nice looking 350z, not actually customised too much, which I find very nice, because I do like the 350z, kind of how it is. 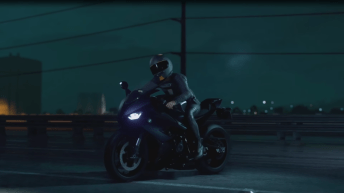 So far, she’s been introduced to us as the person who’ll help us through the night. Definitely has loads of character, and really fits the mood and setting of Heat. Then the other person, Lucas Rivera is the garage owner, as far as I know, and he owns an old modified 1967 Camaro SS. I’m guessing he’ll help with daytime events in the Speedhunters Showdown, and from the story parts that the public has been allowed to see, he might have an interesting backstory too.

Now that we’re on the topic of characters, you actually get character customisation in Heat, which isn’t something that we’ve been able to do in previous games. There are 12 characters to choose from, giving a nice variety of options.

There isn’t any further customisation of physical details from what I’ve gathered, however, there is something slightly exciting if player customisation is your thing. We are getting licenced clothing in Need For Speed, from brands such as Adidas, Life’s a Beach and Marcelo Burlon. To our surprise… our player character talks

I generally tease people that have only played a Need For Speed made by Ghost Games, for not being a “real Need For Speed”, however, I do really think that Ghost have sat down, and gotten themselves together and made a truly amazing game now, and it might be finally time for me to end that tradition. I really think it is worth picking this game up.

Whether if you want to cruise with your friends, fight off the cops, pretend you’re Colin McRae, or slashing the blacklist again. If you excuse me now, I’m off to go race to get that BMW M3 GTR, with my crew… are you?

If you want to catch more of Need For Speed: Heat – Tune into our launch day Livestream over on our Facebook page!

How To Detail A Toyota MR2

Replacing The Slave Cylinder On A Porsche 944

How To Service A BMW E46 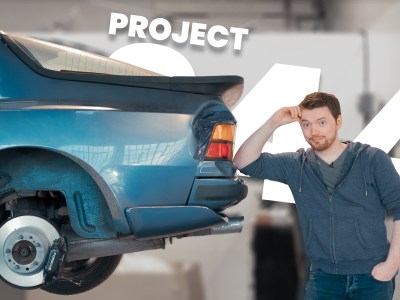 Changing The Rear Brake Shoes On A 944 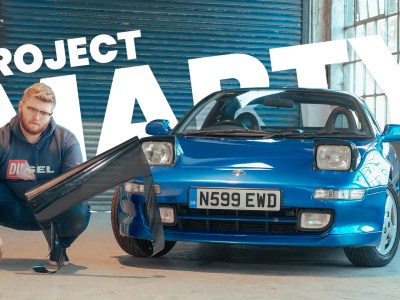 We Tried To Tint Our Toyota MR2