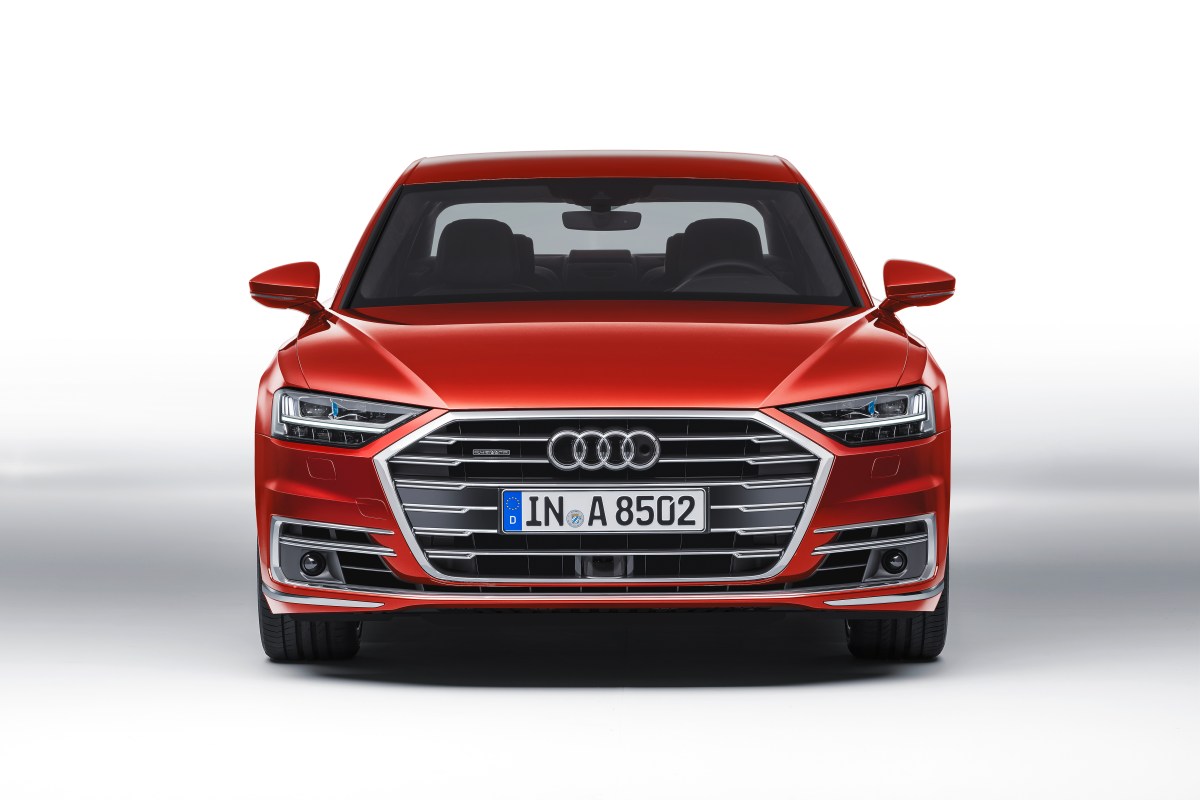 When you’ve been working all day and your back is aching from sitting at a computer for too long, the last thing you want to do is drive a car that takes brain power to operate. You don’t want to think about how the camber of a road is going to affect your steering, or have your back pummeled by a suspension that thinks it’s in the ring with Conor McGregor.

Audi has thought about the folks who want to be rewarded after a long day’s work. They’ve given them the option of the new A8, which Audi describe as the benchmark for Vorsprung durch Technik.

Wearing the newly designed snout that’s starting to grace the Audi fleet, the A8 still holds onto the understated facade that I admired so much on the previous models. It still oozes elegance, but isn’t as ‘in your face’ as other sporty designs. There are hints of aggression with its HD Matrix LED headlights and broad wheel arches, but the fluidity of the body lines maintains its easiness on the eyes.

The interior is where Audi have really stepped up to the challenge, but let’s not kid ourselves – this car is not a driver’s car. It is a chauffeur’s car. And therefore, it is designed around the back passengers. 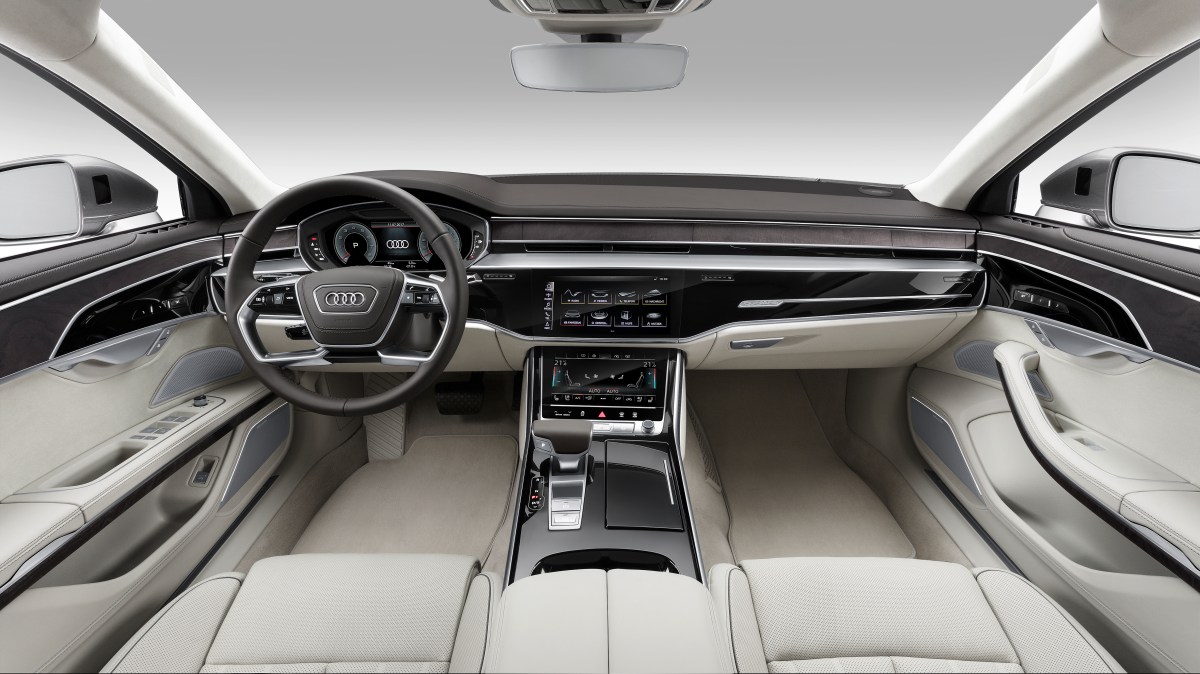 Although as you can see from the images, the cockpit is not ugly by any means. Gone are the days of screens emerging from the dashboard. The A8 houses two touchscreens that control all of the car’s functions directly next to the driver for ease of access. These screens react to your touch with a audible and physical click. The controls can also be activated via voice recognition.

The car is inundated with the latest tech, but in the back is where it gets interesting. The seat behind the front passenger is the one to go for. Here you have a fully adjustable, heated and cooled seat with massage functions for not only your back but for your feet, too. 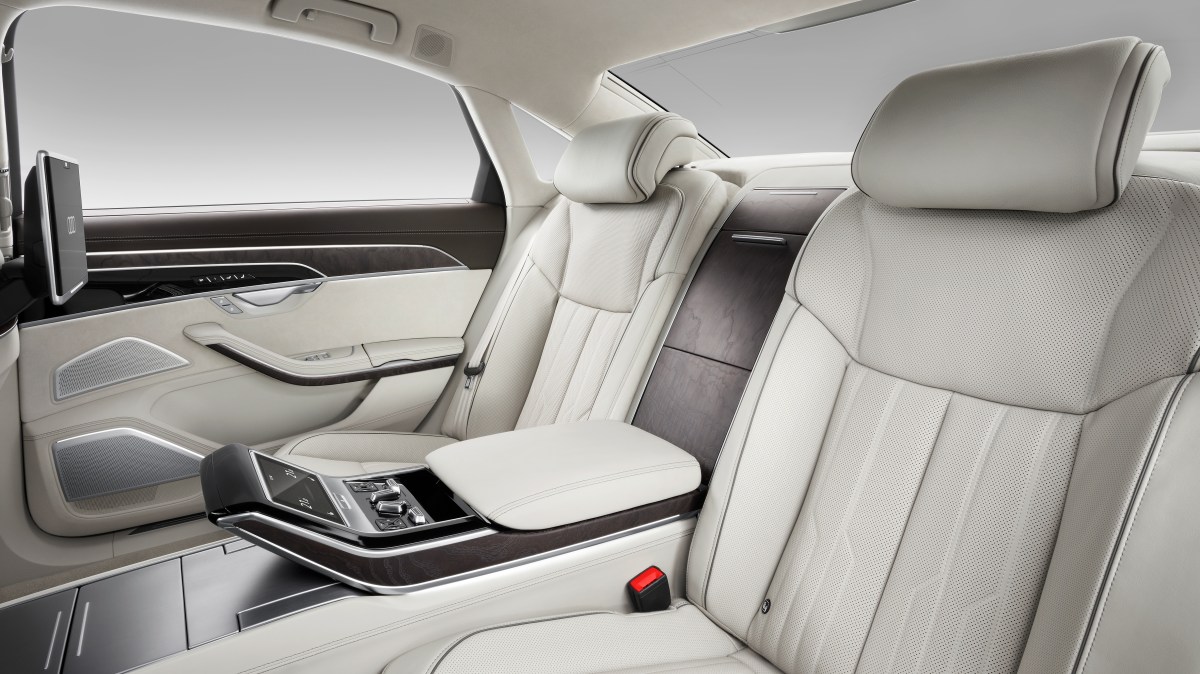 A removable smartphone-like screen sits next to you and can control every aspect of the car like the screens in the front. This gives the passenger ultimate control over his or her comfort.

Talking of control, the A8 is the first car developed specially for highly automated driving. It goes about this in three ways: Traffic jam pilot, parking pilot, and garage pilot. These allow the car to drive itself without human intervention on motorways up to 37mph, and allow it to park in garages and parking spaces by itself entirely. Not a bad idea, especially if you find parking a 5.30 metre car a little tricky.

Now, performance is the last thing on your mind when it comes to an A8, but let’s briefly cover the spec’. It comes with the option of two turbocharged 3.0-litre V6s. One petrol and one diesel producing 340PS and 286PS respectively.

An eight-cylinder TDI 4.0-litre with 435PS is also available, and the range tops out with a 6.0-litre W12 although no word of a power figure.

A hybrid will come later down the line and will boast a ridiculous 449PS and 700 Nm. This will be the one to buy, just make sure you tick the box next to the sport differential. This will complement the AWD system nicely.

Audi have yet to name a price, but I know I won’t be able to afford it. But hey, I cant afford a chauffeur either.