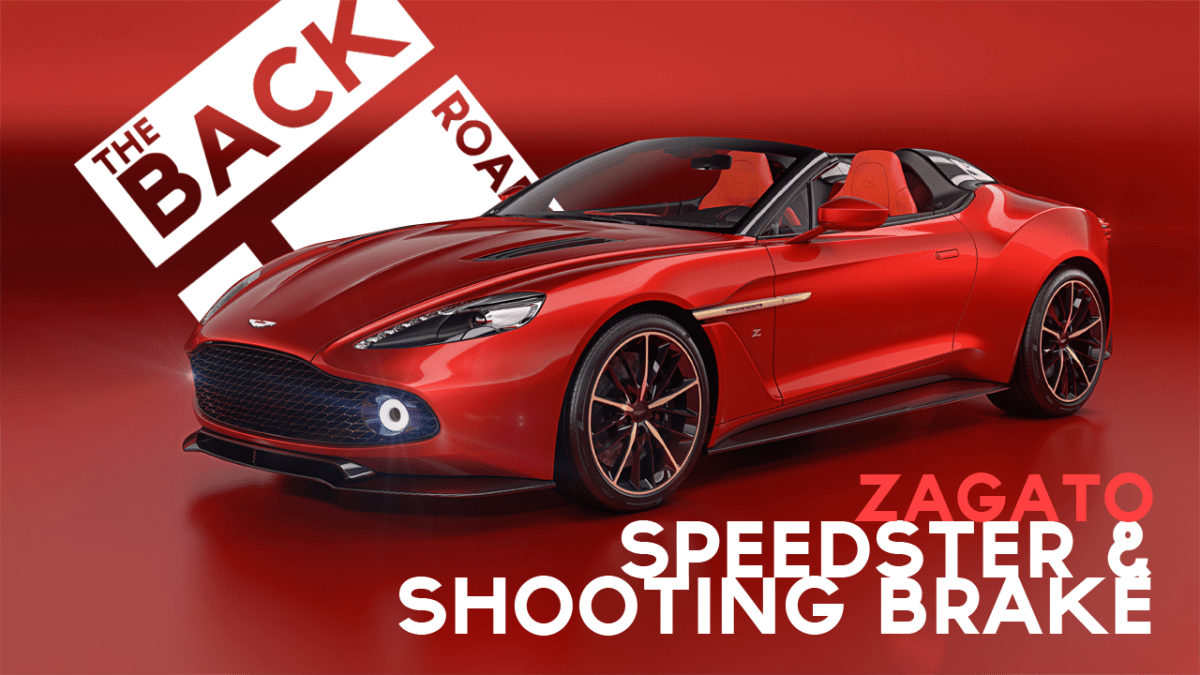 There’s a new addition to the Aston Martin family that none of us are prepared for… why? Because it’s way too NSFW for the motoring industry.

Introducing the all new Speedster and Shooting Brake versions of the Vanquish Zagato. The original Vanquish Zagato was announced last year along with the Volante. So lucky for us the announcement of these new variants bring the total amount of production cars of the Zagato range to 325 cars.

But there’s a catch. Only 28 speedsters and 99 Shooting Brake versions of the Zagato are going to be made. With the speedster only having 28 production cars made, it makes it the rarest of all the Zagato line.

The Speedster and Shooting Brake represent the two extremes of the Vanquish Zagato family. The former is an uncompromising roofless design that expresses the raw excitement of an open-top ultra-high performance sports car. The boldest aspect of the Speedster’s design is the Speed Humps that rise up to form streamlined cowls that flow back from the seats, representing Zagato’s signature ‘double-bubble’ roof. All the body panels are made from carbon fibre, while shared details, such as the Aston Martin Vulcan-inspired ‘Blade’ tail lights and repeated 3D Zagato ‘Z’ motifs in the front grille and rear vent meshes, create an unbroken stylistic thread that connects these otherwise individual creations.

Naturally, being based on the Vanquish S, both of these Zagato versions will sport a 591bhp naturally aspirated V12 to make the hairs on your body stand on end. So you already have a fun toy to place with as well as a masterpiece in art to sit and just… admire.

What about the Shooting Brake?

The Shooting Brake is still a strict two-seater, but one conceived as an individual and exceptionally practical GT. The extended roof on the concept sketch bears the iconic Zagato ‘double-bubble’ surfacing complete with glass inlays to let light flood into the cockpit. The sculptural roof culminates in a powered tailgate that opens onto a luxuriously trimmed rear cabin area, complete with a tailored luggage set. With dramatic herringbone carbon fibre facia with anodised bronze rotary controls, extensive ‘Z’ motif quilting and the option of a fully aniline leather upholstery, the Shooting Brake is a fitting complement to the Coupe, Volante and Speedster.

Aston Martin Chief Creative Officer, Marek Reichman, said: “We haven’t released Zagato models as a family before, at least not in this way, but the idea is not without precedent. Think back to the DB7 Zagato and DB AR1, or the V8 Zagato Coupe and Volante, for example. We’ve simply taken things a few steps further. Why create a family of Zagatos? Well, many of our customers want different things. Some prefer the purity of a Coupe, but others love the idea of something more extreme, like the Speedster.

And yes, some of them have ordered one example of each. There’s always an over-demand from our clients and patrons. We could easily fulfill demand for more cars than this, but we want Zagato to remain something very special. We’re creating collectibles, future concours cars. With only 325 cars worldwide, divided between 99 Coupes, 99 Volantes, 28 Speedsters and 99 Shooting Brakes – they are still the rarest of the rare.”

The Zagato range will always hold a place in our hearts as an example that Automotive design and elegance hasn’t left us.