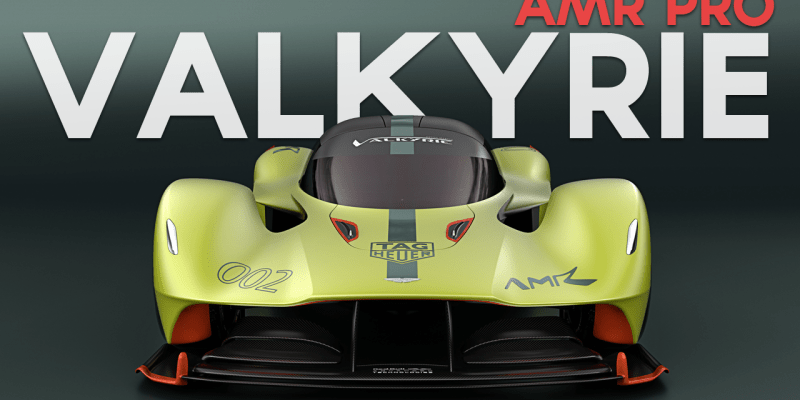 Hey, I heard you like Hyper-cars, so I made your already hyper-car even more hyper, Bro – Aston Martin has announced the AMR Pro Valkyrie because a car that was already ludicrously fast needed to be faster.

Remember the Aston Martin Valkyrie that was announced not too long ago? Well apparently there is now going to be an AMR Pro version of it. Let that just sink in, an even fater version of a Hyper-car… we’ve gone mad.

Okay so what do you need to know?

Wizard like changes to the 6.5-litre naturally-aspirated V12 engine’s emission control systems and re-programming of the Energy Recovery System control software will result in a combined power output of more than 1100bhp – more than the Valkyrie road car and a figure than comfortably exceeds the magic 1:1 power-to-weight ratio. That’s to say more than 1bhp to propel every kilogram of mass.

Full technical details of the Valkyrie AMR Pro will be revealed in due course, but those headline figures that can be disclosed provide a remarkable statement of intent. Key to the car’s relentless track performance are its lightweight construction and high-downforce aerodynamics – a combination that will result in a car that weighs 1000kg, yet is capable of generating more than its own weight in downforce.

The numbers game of top speed has never been part of the Valkyrie objective, yet even in high-downforce track configuration the AMR Pro is still capable of hitting 225mph – so yeah it’s still pretty fast.

To achieve this figure all the Aston Martin Valkyrie AMR Pro’s aerodynamic surfaces have been revised in the pursuit of significantly increased downforce. Most obvious changes are wider bodywork and much larger front and rear wing elements, which together with revised active aerodynamic control strategies tailored for the demands of track driving. In order to save weight this bodywork uses a lighter construction of carbon fibre.

Likewise the removal of items such as the heater/de-mister blower (try not to drive it in winter) and infotainment screens fitted to the road car, and through the fitment of new ultra-lightweight track-specific components such as a polycarbonate windscreen (with heater elements) and side windows, carbon fibre suspension wishbones, moulded race seats and a lighter exhaust system ensure the AMR Pro hits its 1000kg weight target.

So all in all the new Valkyrie AMR Pro is looking like an utter track weapon. We’ll have to await full specs at a later date.