Mini has let us have an early peek at the new JCW GP that has been testing on the Nordschleife, finally revealing additional details for the car after the teasers Quietly revealed at this weekends Nurburgring 24 Hour race was the new 2020 Mini John Cooper Works GP, which has been testing at the Nurburgring Nordschleife for the past few months, being spied by many car spotters that hang about at the ring. Boasting lap times over half a minute quicker than it’s predecessor, which set a time of 8 minutes and 23 seconds. Despite Mini saying that the test plan is yet to be complete with the JCW GP around the ring, Evo Magazine spotted something in the interior of the car which may reveal otherwise… It looks like the car may be capable of a 7:56.69 lap time, which is quicker than the old car but not much in the FWD lap time game, being beaten out by the GTI Clubsport, Megane RS Trophy-R and Honda Civic Type R. 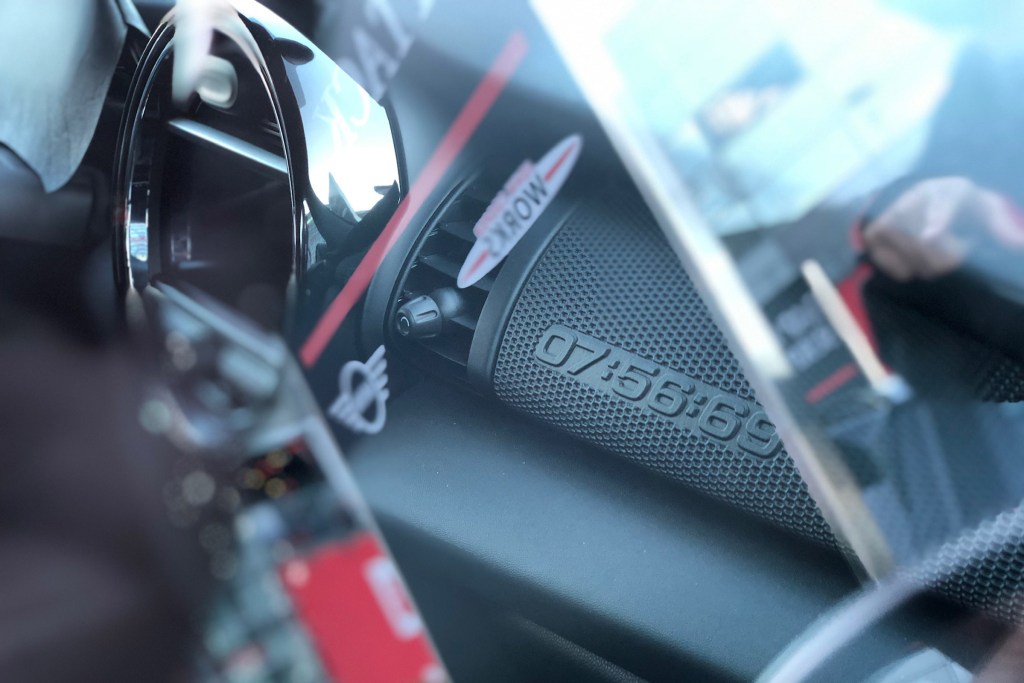 Evo Magazine captured a sneaky picture of the interior of the 2020 JCW GP, showing off the lap time it may be capable of doing around the Nordschleife… or is it a trap?

The GP will be maintaining the Turbocharged 4 Cylinder that Mini has been using in this generation of the Cooper S and JCW, now boasting 300HP/220KW of power to the front wheels. Although still limiting the specifics of the setup, Mini has said that the GP is set up with model-specific suspension tech to improve its handling, and as you can see from the photographs they’ve sent us, some rather interesting aero. The car features a large rear roof spoiler for some increased handling performance around the track (And you can put your McDonald’s breakfast on it when you are on the way to work!), and interesting side fenders with channels for air over the front and rear arches, being described as “aprons” by Mini. Mini’s mission with this new iteration of the GP for the current generation of Mini is to keep the spirit of the previous generations, where they are focused on pure driving pleasure and performance. The car will be produced in a limited run of 3,000 units, each one being serial numbered. No mention of prices as of yet, but with the base John Cooper Works starting from £25,000, I imagine this one will be knocking on the door of £30,000. I’d be lying if I wasn’t a bit excited, as a Mini owner myself. Just a regular Mini. But a Mini.

Here is the announcement video teasing the new JCW GP from Mini themselves:

This Guy Made Need For Speed In Real Life